How to Improve Gender Diversity in Tech Leadership

Over the last few years, the tech industry has seen a number of improvements when it comes to gender diversity. Organizations have been employing several methods of enhancing gender diversity.

The past few years have seen an annual increase in the percentage of women in the tech workforce. That said, the numbers still show a huge disparity between men and women in tech, particularly when it comes to leadership positions.

According to Adevait's data on the current state of women in tech, only 11 percent of Fortune 500 executives are women.

On top of this, 56 percent of the women who are in tech roles leave employment mid-career, which is double the turnover rate of men in similar positions. Those who leave are largely stepping away from the tech sphere, with 24 percent taking non-technical jobs in another company, 20 percent taking a break from employment and 10 percent moving to work for a startup company.

Twenty-two percent switch to self-employment in a technical field, begging the question of whether it’s the industry or the company culture that is causing so many women to abandon their careers.

The Current State Of Gender Diversity In Tech

In the wake of the #MeToo movement, businesses have found that, from an ethical standpoint, cultivating gender equality is the way forward. Beyond that, however, they have been surprised to discover it’s actually good business, too.

Diverse teams boost the bottom line. And while the intricacies of gender identities may not be a familiar language to executives, profit margins most certainly are.

The industry is well aware that gender diversity in leadership is an issue. Solving gender inequality at the top of the tech ranks, however, isn’t an easy task.

There’s a distinct difference between gender diversity and inclusion. Achieving gender diversity (in the tech industry or any other) isn’t simply a case of adding more women to the ranks. It necessitates growing the number of women in positions of leadership, authority and control. That means women require special mentorship programs. They need to gain an understanding of how to navigate hidden bias while cultivating the skills needed for self-promotion and negotiation.

Improving the Numbers through Company Culture

Creating a truly gender-diverse workplace, with an equally diverse leadership structure, isn’t truly about the numbers. It’s about creating a company culture that actively nurtures diversity.

There are several ways to do this, but one of the most basic points is ensuring pay equality. Statistics show that, on average, women still earn less than men in comparable positions.

This may be down to more than the ingrained and arguably sexist pay structures that exist within many businesses. In addition, women are less likely than men to negotiate their salary when there is no explicit indication that it is negotiable.

Women, it would seem, undersell themselves at the point of interview, focusing on acknowledging the skills they lack while underestimating the value of aggregate talents, such as emotional intelligence, that make them excellent candidates.

A shift in hiring policies within a business can redress this imbalance, and ensure women are paid fairly for their skills from the outset. This will ensure incremental pay increases are equal to male peers, as their salaries will be comparable, and thus their pay rises will be also.

When it comes to rising in the ranks and gaining executive positions, resumes pose another roadblock for women.

Men tend to have relatively linear careers, starting on one path and steadily progressing along until they reach the upper echelons. Recruiters tend to use this linear trajectory as the standard by which they measure the success of a candidate’s career so far.

Women, however, frequently have a more meandering career path. They tend to shift between roles and departments, either within a single company or from one to another. This leaves them with a lot of horizontal movement and less upward momentum.

On the surface, this can make women candidates appear to be less qualified. This puts a block in the way of their career advancement because, ironically, they haven’t advanced already.

The reality, however, is that women gain a far broader skill set by following a non-linear path and can bring a great deal more to the table. This is particularly true in terms of communication skills and their ability to comprehend the ‘big picture’ of a business.

It’s far easier to facilitate communication between departments and envision how everything fits together when you’ve been a part of many elements of the whole, rather than a single narrow area.

Practical Steps You Can Implement

Adeva's data on the reasons women are underrepresented in the tech sphere give us practical steps that can be taken in order to improve things. With 48 percent of women lacking the mentors needed to attain higher-level positions, and 42 percent suffering from a lack of female role models, mentorship programs should be a top priority.

Having women to aspire to and learn from, coupled with the opportunities and means to gain the skills necessary to progress in their careers is vital.

We live in an incredibly binary society – black and white, good and evil, day and night. In many ways, our brains have been trained to accept things in terms of absolutes and opposites. So many experiences, objects, phenomena and social mores are seen in polar opposites. Gender is no different, as we have a largely binary society of masculine and feminine, which corresponds to the (equally binary) biological imperatives of male and female.

Genetically we are (with a few very rare exceptions) either male or female, and we struggle to see gender as being separate from this.

And yet, socially acknowledged sexualities have expanded in recent years to realize it’s not as simple as straight or gay; there’s an entire spectrum between the two. With that, our understanding of gender has also grown.

Transgender individuals are gaining more rights, inclusion and equality every year. More and more we are aware that it’s not even as simple as men, women and individuals transitioning from male to female or vice versa.

Gender neutrality, gender fluidity, androgyny. These are just some of the terms that are, for many, very new and increasingly present in society and the conversations of their lives.

True gender diversity means seeing the presence of multiple genders (not just one or two) at every level of business.

It’s clear from the numbers that we are a long way from true gender diversity in tech, particularly when it comes to leadership roles. We must do more to create the kind of company culture and business practices that actively foster an environment that encourages and supports women. That raises them to positions of power and authority. That recognizes the injustice of presuming one candidate will be better than another purely because one may require maternity leave and the other will not.

Any moving beyond this, we must also recognize that women are not alone in their need for greater representation. While it’s incredibly important to further discussions on equality for women - not only in the workplace at large but particularly where leadership roles are concerned - it doesn’t end there.

For more information on the creation of a gender-diverse culture, check out our other resources, or get in touch. 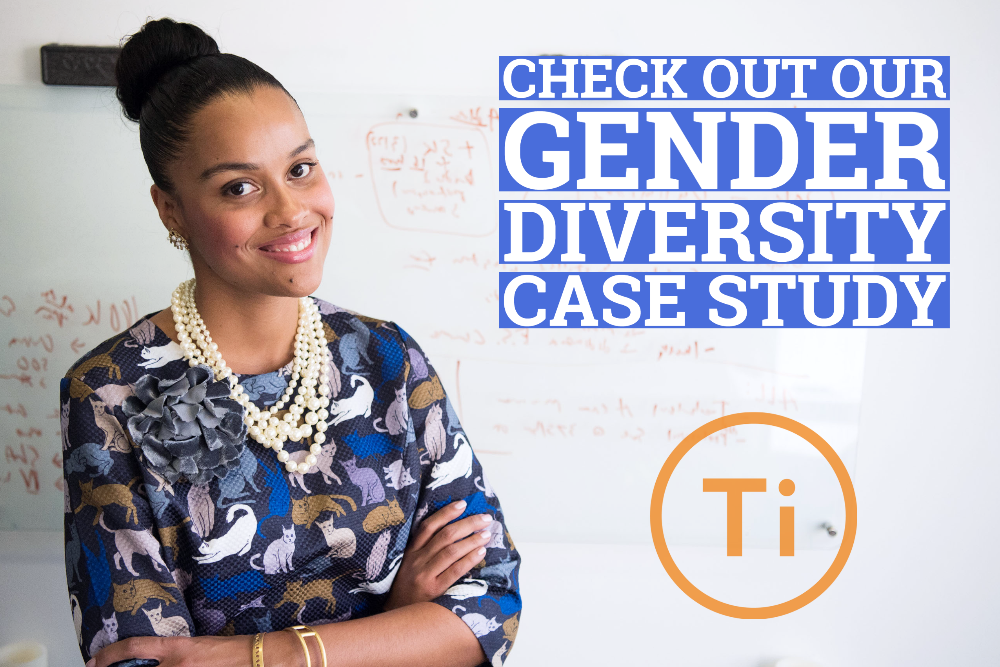